Advanced
Idaho: Caution! Contents Are Hot​
Ever wondered what it is like to walk around the moon? dream no further! Today, we are taking a closer look at one of Idaho's National Parks that is famous for its volcanic history and moon-like landscape. 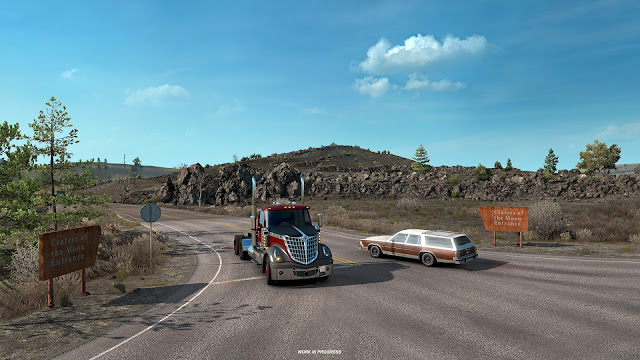 ​
So how did this part of Idaho become so alien like? Between 2,000 and 15,000 years ago, the area now known as the 'Craters of the Moon National Monument' was formed during eight major eruptive periods, in which lava erupted from the Great Rift, a series of deep cracks that start near the current visitor center and stretches 52 miles.

Since its last eruption, the lava has cooled to form an unusual terrain with volcanic rocks, lava flows and rich dark soil.

​
This desolate, yet sublime landscape is also known for its connection with space. The Craters of the Moon National Monument allows visitors to explore a moon-like surface without ever leaving Earth. In fact it's so close to the real deal that in 1969, NASA sent some of it's best-known astronauts to prepare and receive training for their future Apollo lunar mission.

​
Unfortunately drivers of American Truck Simulator wont be able to drive on the moon anytime soon, however; you will be able to get close to the experience in our upcoming Idaho DLC in which we are proud to feature and preserve this unique american national monument virtually!


Also as a bonus for today's blog, we are excited to share with you some exclusive gameplay footage from Idaho! Join us for a ride as we drive between Boise to Grangeville for a preview of what Idaho state has to offer. Take a watch of it at our official YouTube channel below.
​
​